Today I’m very excited to expand the scope of my dossiers outside of the world of theatre and into a slightly different one: the world of Trivia! The range of Really-Cool-Stuff happening in this city always impresses me. That said, Russel and I met each other about a year ago at a theatre event. Surprise! He was hosting, I did a last minute reading of something that is no longer a thing. I met a lot of people that night I surround myself with frequently.

I find it fitting that this talk with Russel is happening now. My life changed drastically over the last year and, as you’re about to find out, so did Russel’s! 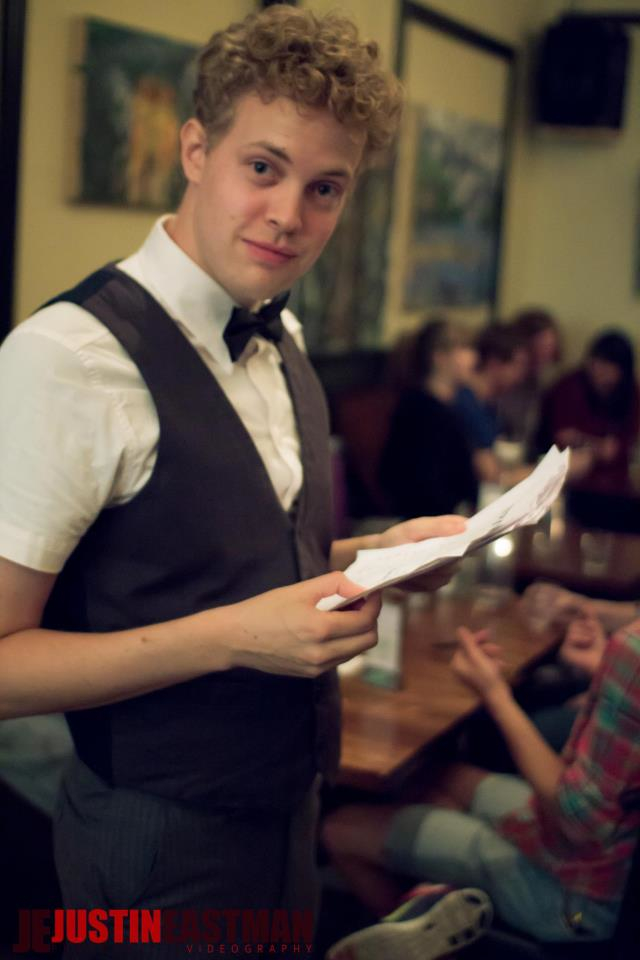 Russel Harder. The self-proclaimed enfant-terrible of Toronto independent thea– oh no wait, that was one of the last dossiers on Brandon Crone. heh, My bad. I’m a Toronto-based actor and filmmaker, and a product of the Atlantic Theatre Company Acting School, the school of David Mamet’s Practical Ascetics that is housed across from the Chelsea Market in Manhattan. The specific Russel we’re talking to for this dossier, to make this as much like written proof of my multiple personalities as possible, is the host, the stand-up, the one man show, the master of ceremonies responsible for Trivia Club.

What drew you to hosting?

There’s an obvious charm of being the one in charge, the one with the microphone. I rarely thought about hosting though, other then the odd wedding of a friend where-in I was the safe pick for MC because I was a professionally trained actor and all, muhuhuh *straightens bow-tie*… More so though, it’s equal parts loving to read the questions when I played Trivial Pursuit, and the ability to approach hosting as a two-hour one-man improv. Sometimes that means saying yes, and being the straight man to an insanely clever crowd. It’s invaluable rep time in front of people. Not to mention you’re being paid to be personable, which may be something of a dream job for me. As far as influences go? The easy answer is Jeopardy and Alex Trebek, isn’t it? There’s a reason why my final round of Trivia Night bares a striking resemblance to this Merv Griffin Production. Though while Trebek has to keep straight-laced and calm, like a pro, even in the face of Sean Connery, I can be a bit more wild and have fun with the room. Then again, that’s one of the perks of working within a bar.

I’m a fan of pop culture, of useless knowledge. Always have been. Even before I knew I loved being the center of attention I knew that I loved obscure things about the Titanic and dinosaurs, or strange facts like how mosquitos are more attracted to you if you’ve recently eaten bananas (and you can thank the ol’ Disney Adventures digest for that one). There’s a certain wonderful fun that’s to be found in sharing the nostalgia of your youth with others. That’s why I could never order packets from some American trivia house, why I have to build my own series of questions for every single show. I mean, inherently pop culture is short hand for a lot of people and hosting a trivia night that I also produce and promote on my own simply gives me the chance to share that experience with a large group of people. It’s intoxicating, bringing up “My Pet Monster” and having people sing along to the theme song. Then there’s the moments where you really surprise people with an answer, or it’s that piece of trivia that they KNOW they should know so when they hear the answer… heh, I’ve found I thrive off of a slightly antagonistic relationship with the crowd.

The plan for Trivia Club came from going to my friend Alex’s trivia night actually (the only one I’ve ever been to, though I plan to do that as I’ve seemed to be part/possibly influence a trivia night boom in Parkdale and Roncy), at the Sonic Cafe near Kensington. It was awesome fun, a real barebones kind of set-up for a shoebox sized bar, but after he did the night once… he decided not to do it again. I had such a fun time too, and with the fact that I am THAT guy in a group of friends who knows everything random or pop culture related, I couldn’t help but host a trivia night myself. And improve on the idea that Alex gave me. The fun of a trivia night isn’t simply asking questions, but hooking people in with the game show aspect of it. It was by complete chance that I found Cardinal Rule (5 Roncesvalles Ave, at the corner of Queen and Roncesvalles) to be the perfect venue for what I wanted to do. The fact that, after 10 months, it’s grown to being twice a month and that it’s now sponsored by Mill St Brewery, is something that I never quite expected.

What is the earliest memory you have of wanting, or needing to be a host?

I’ve always loved the interview part of hosting, so it makes sense that I’m still knee deep in questions with Trivia Club @ Cardinal Rule. I think what you’re doing with these dossiers is pretty awesome actually. As a fan of pop culture, I’d much rather make the culture popular, especially local culture. I honestly love game shows, the competition on display, but my first hosting and what will always influence me is the talk show. David Letterman and Conan O’Brien, and on and on. I found a niche, even in niche projects with friends as the documenter, the interviewer, throwing in “special features” to make it a magazine. I suppose that, when I was 11 or 12, is my earliest feeling of hosting.

Do you have a favourite memory from a past Trivia Club?

When Mill St Brewery started sponsoring Trivia Club. Ooo yeah, drink Mill St Cobble Stone Stout! (this answer brought to you by Mill Street Brewery) In all honesty this made me do some serious digging, which was quite useful with Trivia Club’s Anniversary Spectacular coming up on the 10th of April. Thanks for the reminder! I say that and I still won’t give a specific answer. I’ve mentioned being a fan of the energy that this night brings, the groans of defeat or the outright jubilant cheer of victories small and large. What has really been exciting has been the minutest victories, victories by HALF a point at the end of the night even after 50+ points have been won, that gets the Champion of the month the Golden VHS (last month was The Jungle Book).

Describe Trivia Club in three adjectives or a phrase.

Unpredictable. Inspiring. It’s not what you know, it’s what you learn along the way. That last phrase has not only become my trademark way to sign-off at the end of the night, Trivia Club’s defacto catchphrase, it’s my “Goodnight and good luck”, and an olive branch to those who don’t think they’re any good at trivia nights, but also something of a motto for my approach to this event. Now in my eleventh month with the production it’s evolved month in and month out, as I’ve learned what works and what doesn’t with a show. How to keep things exciting and new, how to work with crowds, and deal with hecklers. I know much more about production, promotion, and hell even contract negotiating then I did before. I’ve also gained a family of friends at Cardinal Rule. They truly are excellent folks, and it doesn’t hurt that the food is fantastic.

Do you have anything you want to share with us? A story? A photo? A song? A video?

Okay, so that wasn’t even a good story, it was a bad joke from Prairie Home Companion. For good stories, I welcomely direct everyone to my friend Arianne Shaffer’s website. She’s incredibly entertaining and also whip smart. http://youlooklikemestorytelling.com/

Aside from hosting Trivia Club, acting, and filmmaking, I also checked a box on my bucket list by getting paid to read comics. You can read the labor of those fruits, my comic book reviews, on the Silver Snail website. http://www.silversnail.com/main/

In honor of valentine’s day, I suggest everyone watch this Trivia Club classic (I’m sure the people that regularly come to Cardinal Rule will be surprised that I linked neither Alanis Morissette or David Bowie):

And finally, I wouldn’t feel right without leaving your readers a little bit of trivia to answer. Now I usually don’t do multiple choice with Trivia Club, as it isn’t as conductive to the large crowd atmosphere but a bit of clicking the right answer wouldn’t be a turrible idea for this format! As an added bonus, real-live Trivia Club sounds will be used to give you that at-home experience.

In the film, The Princess Bride, what special effects technique was used to create the Rodents Of Unusual Size?

A) LIVE ANIMALS IN HEAVY MAKE-UP

Hope everyone knocked that question out of the park, and now want to go and watch The Princess Bride again. So yes, come out to Trivia Club at Cardinal Rule. It’s the second and now also fourth (usually the last) WEDNESDAY of each month, which means for both February and March you’ll have a chance to enjoy Trivia Club on the 13th and the 27th of the month! Then in April, on the 10th, Trivia Club will be celebrating its ONE YEAR ANNIVERSARY! So make sure to come out for that massive celebration that will be sure to give all the awesomeness of the past twelve months of trivia some due gravitas. I look forward to seeing you at Cardinal Rule, for the prizes, the knowledge, the great food, and drinks, and friends.

Remember it’s not what you know, it’s what you learn along the way.