Jordan and I met a couple years ago, at a workshop of a mutual friend’s show. Since then we’ve continued to stay connected in some way or another, usually around performances and works-in-progress. When I started this blog up, I immediately thought of VIDEOFAG for a dossier entry. We tried to meet, but life was a little too unstable for us. Things kept getting pushed back and ultimately forgotten, until I was able to come by VIDEOFAG to see a “prototype” (more polished workshop term coined by Jacob Zimmer of Small Wooden Shoe) of a new Sky Gilbert show, To Myself at 28. Jordan invited me to stick around afterward for tea and so we could get this done. Thinking about it now, how serendipitous that it took another “workshop” to get us in the same space for an extended amount of time.

If you haven’t met the boys of VIDEOFAG, or if you haven’t been there to see their ever-changing programming, do yourself a favour and check it out. It’s arguably one of the more exciting new spaces in Toronto right now. 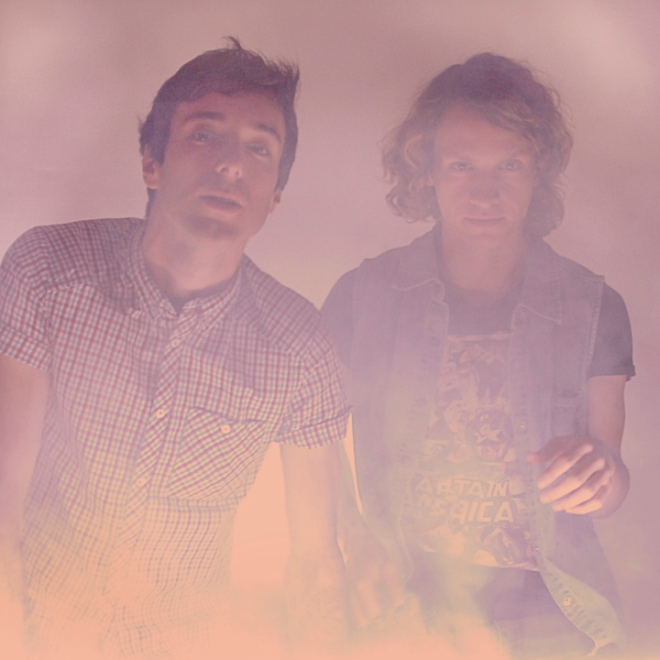 On the right: My name is William Ellis. One half of VIDEOFAG.

On the left: I’m Jordan Tannahill. We’re boyfriends and proprietors of VIDEOFAG.

Co-owners of the space?

What else do you guys do?

Jordan: I’m a playwright and director.

Tell us what keeps you going, in other words, why do you do what you do?

William: I think, ultimately,  I’m interested in stories, people’s stories. That’s both fictional and people who are working through things. As an actor you get to embody these stories and relate it to your own life.

Jordan: I think I’m just naturally a curious person. I love being challenged and I think art making allows me to pursue my curiosities and surprise myself and challenge my assumptions. Having this space is almost, like, you never have to have a Netflix account. We can just sit in our living room and just watch the most incredible performances in Toronto. And I think in a way it’s about nurturing ourselves as artists as much as it is about building a community. I really do believe in the value of community building and creating opportunities for my friends.

It’s a lot of work running VIDEOFAG, but it always feels new. Every project we put on, there’s new challenges and new rewards and so it doesn’t ever get, it never feels like we’re just doing 9 to 5. We’re building a space that we as artists want to see. We’re building our optimal experience.

What’s your earliest memory of wanting, or needing to do this kind of stuff?

Jordan: Yeah, I was the kind of kid who wandered a lot by himself all along the edges of the playground. I’d be thinking and singing to myself. When I was at my grandparents’ place, I’d be wandering through the woods by myself for long periods of time. I remember also making my own episode of Camp Caribou, I don’t know if you remember that show, and that was maybe when I was, like, 3, or maybe –

Jordan: I mean, I didn’t, like it wasn’t all staged and –

William: I was like peeing my pants when I was 3.

Jordan: We never had, we were never a camcorder family, so maybe that’s why I’m in performance because I was never playing with the family camcorder.

William: Did you have an audience?

Jordan: Not really. Although I feel like, (to William) you and I talked about this, but I think space making came very early, because I would always have stores and barber shops in our basement. I think a lot of kids do that.

William: Or like building forts? Our own little playhouse or something.

Jordan: I feel like VIDEOFAG is our adult fort.

Just like the Storefront Theatre, Videofag is an amazing new development for this city’s art scene. The excitement for these new spaces is palpable. Tell us how Videofag came about?

Jordan: It seems like in the last four or five months specifically there seems to be this kind of renaissance of space. Speaking personally, I was actually really inspired by, specifically, what was happening in the visual art world. Visual arts has continually and regularly engaged with the DIY headspace since the get-go. I think a space like Double Double Land on Augusta, just up the street, that was hugely influential for us. The fact that people were making their homes into these spaces for community and for art presentation and art creation was really exciting, and that they were always innovatively being used, not just for rehearsal, or whatever, yoga classes, but they were actually being used as spaces where challenging work was being put on on a regular basis. I think FAG as well, Feminist Art Gallery, Allyson Mitchell and Dierdre Logue’s space that they run out of their home was a really inspiring model as well, the idea of just, having this space with a very strong mandate. They’re completely charting their own. They’re kind of making their own utopian political environment. That’s really inspiring.

William: [Art galleries] have been around for much longer as well. Judith Thompson mentioned in the 70s about these early spaces. I was reading an article last night about a bunch of underground art spaces that were on Augusta just two years ago. Most of them no longer exist. They were all sort of live-work art spaces that had a quick turn-over.

Jordan: I think that’s what sets up apart from a lot of the theatre spaces. It is borrowing often from more of a visual art model.

What kind of programming is Videofag interested in hosting?

Jordan: I always use the word transgressive. I think something that’s challenging maybe a marginalized or – whether because of form or content – wouldn’t otherwise get programmed at other institutions. We’re interested in works in progress or new ideas.

Is it always performance-based?

Jordan: We do a lot of video screenings, we do lots of lectures, talks, community dinners. We do function as kind of an art gallery. So we’re a totally omnivorous space.

We were talking about the idea of feral curation: the idea of artists will come to us, or we’ll come to artists. There’s no set model for how we engage. It’s very conversational. We just allow projects time to gestate. We find the right resources for that to happen and we also gift the space to artists. We host a lot of residencies and tailor them to a project’s needs because one size doesn’t fit all. That’s why we’re always so active and also why so much new work is being developed in the space because we’re totally flexible.

William: We’ve certainly been amazed at the different communities we’ve discovered in Toronto, and how many different people and how many different groups there are. I think a lot of traditional theatre spaces tend to tap into the same theatre audience and it’s not that big. There are all these other people doing interesting things.

Jordan: I think it’s important for us that VIDEOFAG be a place that’s accessible to artists of every age. Different generations. That it’s a space for conversations between generations, in both the queer community and the larger arts community. I think as young artists we can learn a lot from artists who have been doing this for a lot longer than we have.

What is your favourite memory so far in the development of Videofag or of the programming you’ve hosted?

(a brief pause as they look at each other; smiles on their lips.)

Jordan: I think we’re both thinking the same thing. It’s kind of legendary now. It’s become my favourite memory but it was horrifying.

William: It was horrifying. Oh my god. It was during Salvatore Antonio’s TRUTH/DARE event –

William: – and they’d done a live reading of Madonna’s Truth or Dare documentary, and there were dance breaks during the show, and, our downstairs neighbour just came up at, like, 10:30 – 10:35, and the show had just ended and people were slowly drifting out and she, she came with her husband and with their friends, and sort of tried to shut the party down by unplugging the speakers. And then she –

William: And then we were trying to tell her, we’re done, the show’s over, people are slowly leaving, and she just, like, lay down on the floor and had a panic attack, or, like, some sort of, like, we didn’t know if it was a seizure, or –

Jordan: Tantrum is the perfect word for it. It was not medically induced, it was absolutely a performance of, like, exasperation.

William: It was so confusing because we didn’t know what to do or how serious it was. And so I called 911, and paramedics came, and people just sort of, you know,  were just watching.

Now usually I would ask about what kinds of shows we can look forward to.

But because I took a bit longer to get this post live, the shows Jordan and William plugged when I interviewed them are either just about to happen or have passed.

So, instead of me transcribing that portion, I’ll just divert you to VIDEOFAG’s website and Facebook page to keep up-to-date with the many, many events they have planned. It’s really this hugely mixed bag of goodies, kind of like those mystery grab-bags you may have bought from a corner store as a kid. I’m sure something will raise an eyebrow.

Wasn’t that a lovely talk?