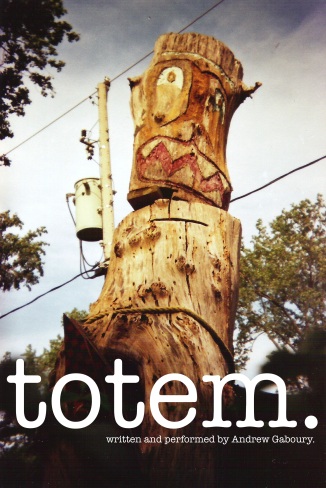 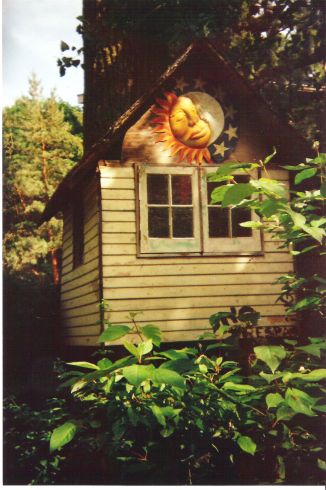 So. Tomorrow’s the day. My first solo show, totem., will open to a willing audience ready to hang out in an art gallery and watch a boy from Toronto try to find his footing in a city he hasn’t properly been introduced to yet (I mean, he did live there in his Junior, and Senior kindergarten days, but all he really remembers is living up on the escarpment and driving down into the city proper to get things).

It’s been an interesting ride with this piece. It began as the product of a writing exercise at the first meeting of Steady State Theatre Project’s Writer’s Circle. The next week it expanded a bit and then became an experiment in rhythmic reading and performance at Theatre Caravel’s Sea Change. When I heard about the Gallery Mini-Series taking applications, I thought, why the hell not? If I get in, then I’ll have a deadline and need to finish writing the damned thing. And I did get in. And I did finish writing it.

The original totem., as it sits in my computer, is an 8-page, 3200-word short story. It belongs in a world I created a few years ago for a play I have yet to move from messy first draft to messy second draft. It is not part of that play, though. It is it’s own entity.

So transferring it from a short story to a solo performance has been an interesting feat. It is very true what they say, when crossing disciplines, what works in one will not always work in the other. My working script for the show opening tomorrow is full of black horizontal lines, scratching out all those little things, not because they’re bad, but because they just don’t translate. Now, usually, I’d be hesitant to do this. Usually, I’d hate seeing my baby cut because-every-word-is-in-there-for-a-reason-and-is-integral-to-the-whole. But this time it was easy because I actually haven’t changed the whole; it still exists as a short story. And tomorrow, and Saturday and Sunday, I will not be performing a short story. I will be performing a play.

I appealed to my director / choreographer Kallee to animate my words. I would be in charge of them, she would be in charge of my body. Move this way, stop there, turn to your right, keep moving, I don’t want to see you stop. This is how it began. She got me up on my feet. Exactly what I wanted.

As it continued, as we worked through page after page of dense writing, of thick black slashes and puzzled over how to adapt narration, our roles blurred. No longer were we actor and director. Together we became devisors. Today and yesterday, specifically, I had flashbacks to my days at York University with my fellow Creative Ensemblers, puzzling over the texts we were given, the limitations we had to flourish within. We worked together to figure out how to animate something that was not, and will never be, theatre. We learnt how to work together. We learnt how to create something entirely new.

So. When totem. opens tomorrow, I will not be presenting my short-story to a theatre audience, even though I am endlessly proud of this specific short-story. I will be showing them a piece of theatre. A brand new piece of theatre with one performer and two creative minds.

It feels good to get back to my roots.

totem. opens Friday, July 19th @ 7:30, then again @ 9pm at the James North Studio Gallery, as part of the inaugural Gallery Mini-Series at the Hamilton Fringe Festival. Tickets are $8 if you make a one-time purchase of a Fringe backer button ($4) and are available at the door or online.

Come and celebrate the 10th birthday of the Hamilton Fringe, the inauguration of its Gallery Mini-Series, and the birth of a new play.