Form and Fixation features two extraordinary works in one show: Reverie, which explores automatism and the natural meanderings of the mind and Blue(dot)Political, a politically charged work commenting on the roles of leader, follower and individual. Form and Fixation will inspire you to reflect upon our complex realities as individuals within society.

FCDT is based the Hamilton/Burlington area. FCDT intends to create art that is inviting for audiences, art that combines extremes in its emotional content and art that is informed by human experiences. We aim to create works of art that have a raw and vulnerable essence.

A Man Walks into a Bar

A new play by Rachel Blair
Directed by David Matheson

A woman, with the help of a man, tells a joke: A man walks into a bar and meets a waitress. As lines between the performers and the characters blur, a tense and funny standoff about gender, power, and selling sex emerges.

Director David Matheson is Professor of Acting at Sheridan/UTM and Artistic Director of Dora-nominated Wordsmyth Theatre.

Performer and playwright Rachel Blair won the Fringe New Play Contest in 2008 with her debut play Wake, which earned Patron’s Pick and Best of Fringe.

Performer Blue Bigwood-Mallin is a Toronto-based actor and director, as well as, a founding member of Coyote Collective.

Fruit Fruit Mouth Mouth is the debut production of new theatre company Illume Collective. This adaptation of Christina Rossetti’s The Goblin Market is a ridiculous, sexy, and intense production. Protagonist’s Laura and Lizzie are faced with their deep sexual desires and must decide: will I taste of the goblin fruit? Fruit Fruit Mouth Mouth has it all: lesbians, goblin puppets, and a kiddy pool full of fruit juice.

Fruit Fruit Mouth Mouth tastes so good you’ll never get it out of your head.

Illume Collective is a new theatre company interested in creating adaptations of timeless stories. Our style of theatre combines storytelling, elevated movement, and abstract staging to create dream-like worlds. Illume is committed to making accessible theatre that still challenges an audience. Each member of Illume brings with them a unique and varied set of skills. The skills may be different but the vision is the same: create work that serves a purpose.

by the Cheshire Unicorn

A quirky, dark and yet comedic performance in the tradition similar to that of Pina Bausch’s dance-theatre which explores the unrelenting effects of discrimination in humanity due to intolerance of social nonconformity. How much does this intolerance threaten and destroy the very things that make us special? We’ve all felt different at some point, quite simply because we are all combinations of various elements, each of us completely unique. So why then do some societies find safety in sameness and fear and danger in the idea of the other, while others rise above to create and perpetuate anti-oppressive movements like the Human Rights Charter? Everyday Oppressions examines social justice trends through various movement styles such as alternative ballet and burlesque.

Launched in 2002, The Cheshire Unicorn aims to produce innovative, thoughtful, and experimental productions created by Canadian artists. Since it’s founding, the company has consistently staged thought-provoking and interesting theatre, gaining itself a prestigious reputation in Toronto’s independent theatre market. The Cheshire Unicorn continues to entertain with diverse productions ranging from historical absurdist drama to modern surrealism. 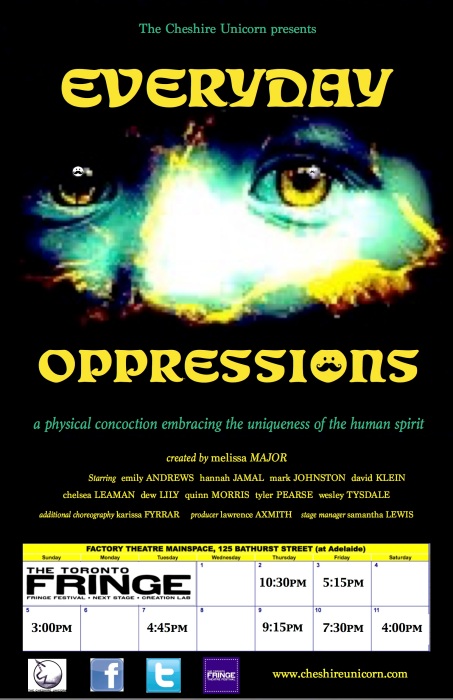