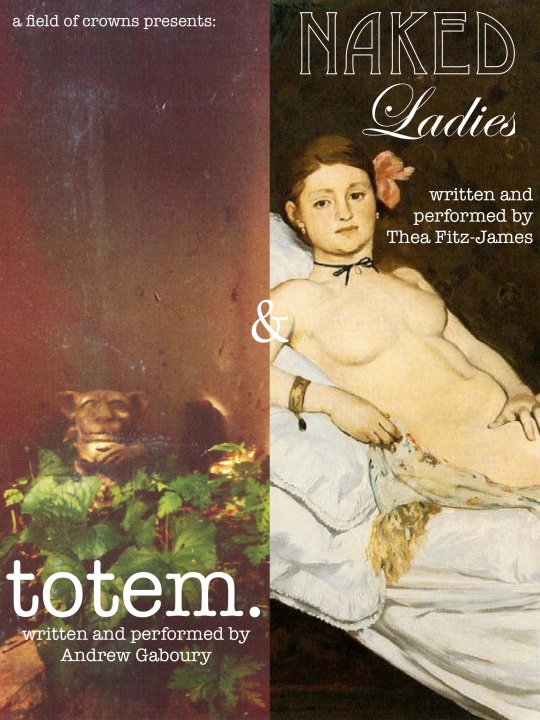 a field of crowns presents:

If you missed totem. in Hamilton, now’s your chance to catch it in Toronto!

Together, Fitz-James and Gaboury bring you a night of honesty, ritual, mythology, story, bias, nakedness and drinking.

totem. is an exploration of one man’s emotional, mental landscape as he confronts his crumbling relationship and is presented with a fantastic manifestation of his ideals. While a work of fiction, totem. was born from months riddled with a crisis of self-confidence. At the end of this time, Gaboury realised what he needed wasn’t what he always relied on, and instead found relief in something completely unexpected. totem. began life as a short story, mostly written by stream-of-conscious, influenced by the performance of spoken-word poetry.

NAKED LADIES is that moment where someone tells you that women are naturally secretive. It’s the moment they say, “Women take off their clothes to forget about their fathers”. It’s locked in the skin; intimate—between the shadow and the soul. For what are we hiding when we show it all? And what does it mean to be truly exposed? Between the naked and the nude, between forgetting fathers and remembering mothers, past sexual stigma and personal secrets, NAKED LADIES weaves personal narrative, art history, and performance theory to ask why women get naked on stage and off. Why, where and for whom?

tickets are available at the door
-or-
can be reserved online by sending an email to:
afieldofcrowns@gmail.com

Thus begins, or, if not begins, at least furthers, with Alex Eddington’s dossier for YARN, the hype that is leading up to the 2013 Toronto Fringe Festival, or, as many of us term it, arguably the most exciting time of year for independent theatre in Toronto. I’ve fallen in love with the Toronto Fringe over the past couple years; there is nothing else that happens in this city that rivals the excitement, the passion, and the palpable energy that comes with the Toronto Fringe, especially since it’s established it’s new home at Honest Ed’s in the Mirvish Village. You actually get the sense that most of the people you see are talking about theatre. How rare!

For my first couple years Fringing, I was solely an audience member just trying to take in as many of the shows as I could. Last year, I moved on to the production side of things, producing and directing Peter Counter’s original play VIC HARBOUR with our currently-slumbering company The Four Winds Collective. Even though I was directing last year, I still made the effort to be an active audience member and ended up seeing more shows than ever before (I think my tally was 15 ~ not including the 6 or so performances of VIC HARBOUR I had to see to ensure we didn’t burn down Theatre Passe Muraille). This year, I am proud to be acting in the festival… which I’ll talk more about in an upcoming dossier. Just like last year, even though I am acting in the festival I’m still going to make the effort to see as many shows as possible.

And Aaron’s play, CHARMING MONSTERS, is definitely on my list of shows to see. Aaron and I have only met a few times before: the first time we didn’t actually meet, but I saw him perform in Theatre Lab‘s physical TO THE LAST CRY; the second time (being the first time actually meeting) we acted alongside one another in a play reading for a friend; and the third time we were actually in the same writer’s circle with Steady State Theatre, where I heard an excerpt from CHARMING MONSTERS. Hopefully the next time we meet we’ll be having a drink at the Fringe Club and talking about the play.

What drew you down this path? (to theatre, to writing, to wherever the hell you are in life)

Originally I was training to be a contract killer, but decided to pursue art instead. My train of thought was I could do it all. I like to play many characters, and when I direct a show I get to play them all. In writing a play my favourite part is creating a world for the characters to exist in, and then if they piss me off I kill them. :)

What is your earliest memory of realizing, yep, this is what I’m going to do with my life?

I remember performing in shows with my sister when we were quite young, and we made up stories to fall asleep at night. This always stuck with me.

The title comes from a song I wrote for an earwig in my first play. The name is appropriate because I believe we all have demons in our closets, and in this play the women are very generous until they are taken advantage of…

What kind of atmosphere do you intend to set up, or can someone expect from CHARMING MONSTERS?

I wrote it over my first majestic winter living on Toronto island, and so the play is dark whimsical. This is a brave new world with some familiar twists.

Have you had an original play in a Fringe Festival before? If so, what was your favourite memory from then?

I premiered my first play, AMBIGUOUS in the 2011 Fringe festival. I won the Trey Anthony award for excellence, which was pretty amazing. Also I remember a conversation with an actress which we discussed her wearing pasties and a see-through vest.

What are you most looking forward to with being part of the 2013 Toronto Fringe?

I enjoy mingling with other artists, and watching my peers working. There is something magic in this festival.

Describe CHARMING MONSTERS in three adjectives, a phrase, or with sound.

The end is the beginning…